How to Manually Build an ASP.NET Core Application and Push It to AWS Lambda


In this post, I'll explore the differences between builds and deployments. I'll also walk through the steps of manually deploying the ASP.NET application to AWS Lambda. The exact version of the source code is available in GitHub as Release 0.0.4. I almost always create a release when I push code to the master branch (and my goal is to have that process automated). This way, I can link an article to the exact version of the code that I used, and you can follow along at home.

Some people get confused by the terms build, release, and deployment. There have been times when a developer has reported that "a build has failed." Naturally, I open up whatever automated build system is being used (Jenkins, TeamCity, etc.), only to find that the build was successful. Of course, I know where to look next; the deployment system (Octopus Deploy, Release Pipelines, etc.). Sure enough, it was a deployment that had failed, not the build. The confusion is understandable for a number of reasons:

To help ease the confusion, I explain it like this: There is a one-to-many relationship between builds and releases. Consider this diagram:

The deployment system, on the other hand, has a different job: Take the software and deploy it to a given environment (Dev, QA, Test, Staging, Production, etc.). Deployment usually involves copying some version of the software to an environment and performing whatever configuration is necessary for that environment. This can be done any number of times; in fact, the goal is to make it as repeatable as possible.

In a previous article I demonstrated how dotnet publish is the primary mechanism for building and packaging a .NET Core application. When you run dotnet publish, you get a folder that contains everything your application needs to run in the target environment, minus any environment-specific configuration. In that post, I demonstrated how I can run the application on both my Windows PC and on my wife's iMac. I could also take the application as-is and run it in Microsoft Azure. But deploying it to AWS (and specifically, AWS Lambda)? That requires a little more work --- and a few code changes.

AWS Lambda is part of Amazon's Serverless Compute platform. A Lambda function is a function, in the sense that it takes inputs and returns an output. That's all. It's not a server platform. You can't send HTTP requests to it, at least not directly. Fortunately, Amazon has created a NuGet package that bridges that gap. The package Amazon.Lambda.AspNetCoreServer, along with its dependencies, allows you to host an ASP.NET Core application as a Lambda function. You still send inputs to the Lambda function, but these inputs are repackaged as HTTP requests and fed directly into the ASP.NET Core pipeline. Amazon has a blog post explaining this in greater detail.

So I added the following packages to my project file:

I also needed to set up a special public class that actually receives the Lambda function calls. This class in turn calls the regular ASP.NET Core Startup class and passes the Lambda function call into the ASP.NET Core application. By convention, the class is called LambdaEntryPoint, but it can really be anything you want it to be. I decided to follow the convention:

We're almost ready to try it, but there's one more catch. Read on.

Setting Up the Lambda function

To set up the Lambda function manually, I logged into the AWS Console and selected "Lambda". Once here, I clicked on the "Create Function" button and was taken to a screen that had a few options for creating Lambda functions. I used the "Author from scratch" option. But take a look at the "Runtime" dropdown, highlighted below: 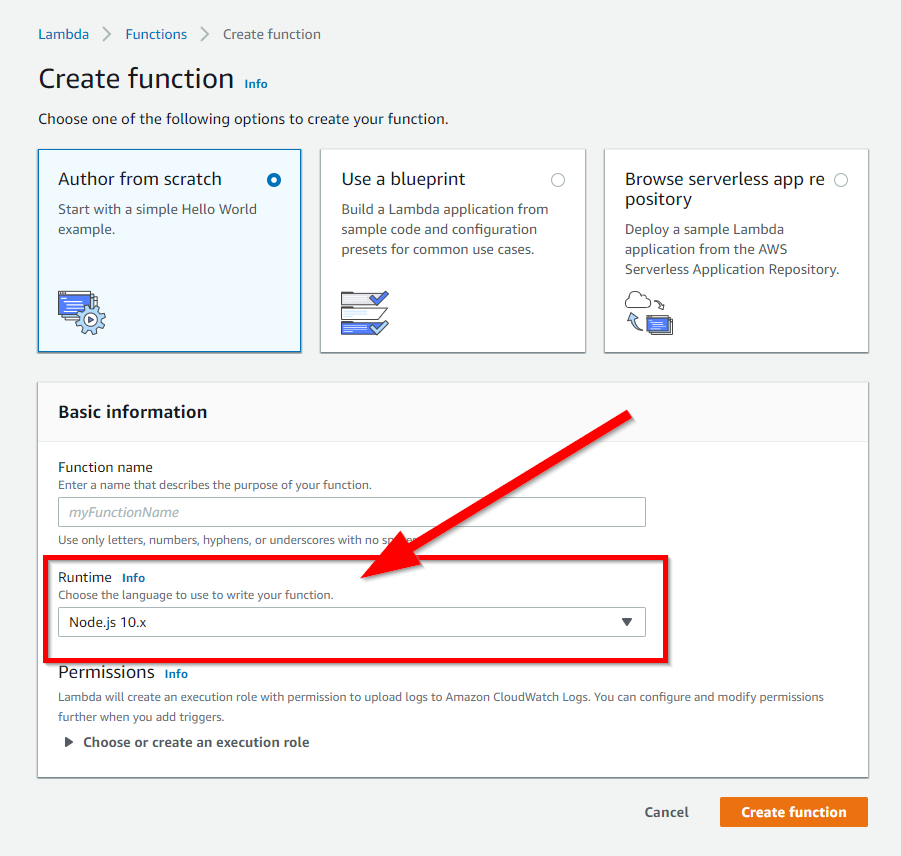 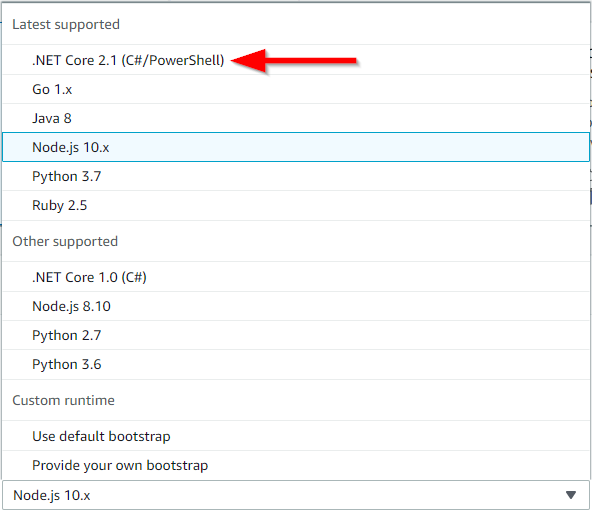 It's great that Lambda supports .NET Core, but it's a bit of a bummer that it's not the latest version. AWS only supports LTS (long-term support) versions of .NET Core in Lambda. There is a workaround, as we shall see in a bit, but I do want to demonstrate how easy it is to implement ASP.NET Core with AWS Lambda using the built-in runtime. So temporarily, I downgraded the project to ASP.NET Core 2.1:

There's also this line in Startup.cs:

I re-ran dotnet publish -c Release to rebuild the website. We'll see how to get the code up to AWS in a moment. Back in the AWS Console, I created a Lambda function named "proof-of-concept", specifying .NET Core 2.1 as the runtime. I also selected the default option to create a role with basic Lambda permissions, which will suffice for now, but is not what you want to do in a production system. I'll cover how to properly set up AWS Roles in a future post. 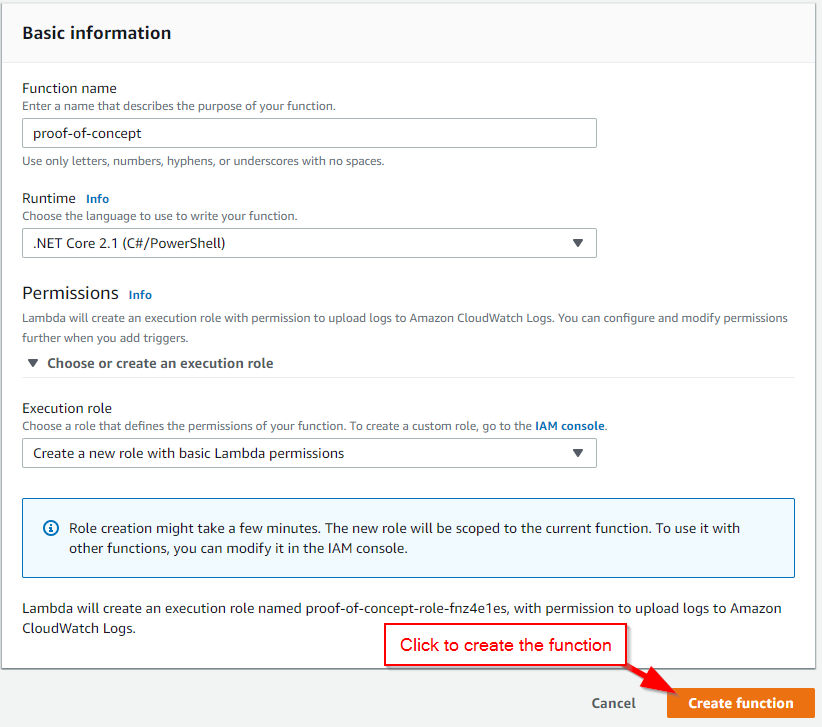 Once the function is created, I was greeted with the screen below. The "Function code" section listed the options for getting the code to AWS Lambda: 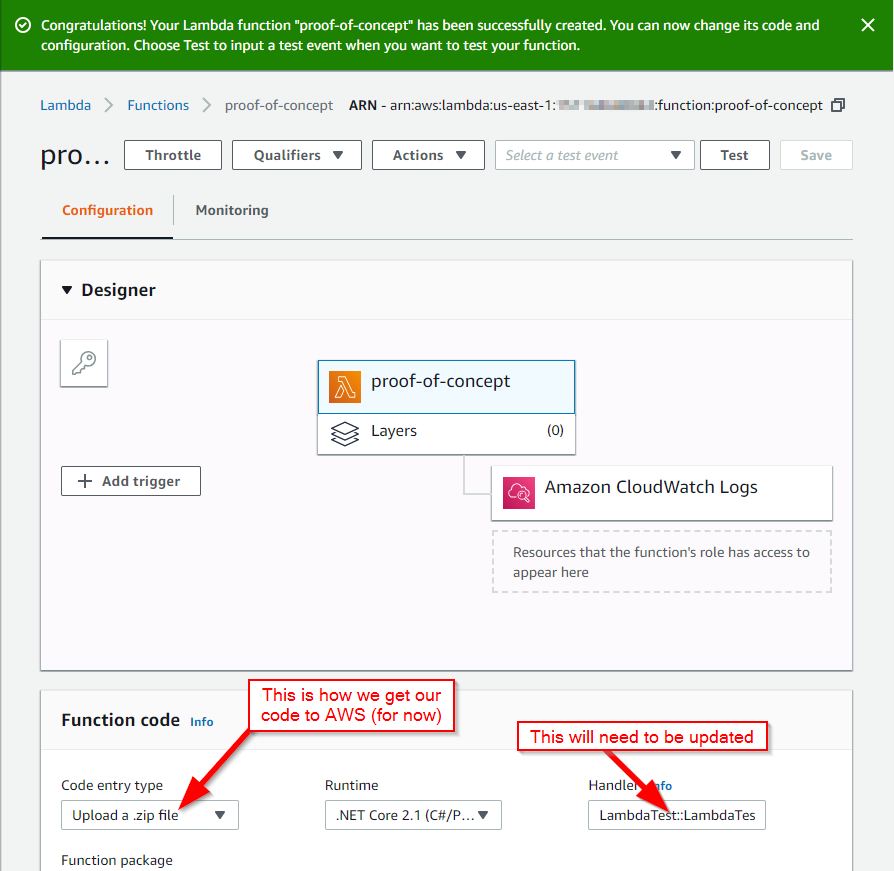 Simple, right? Just zip up the Publish folder and upload, right? Well, not really. You need to zip the contents of the Publish folder. In other words, if you're going to do it from Windows Explorer, don't do this: 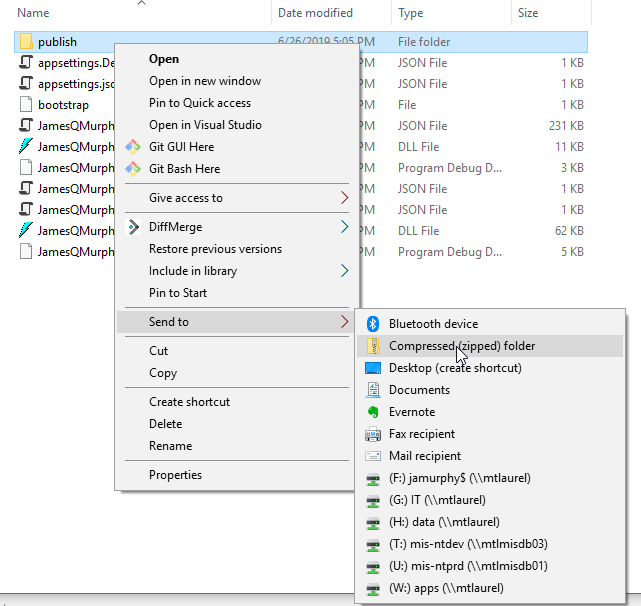 Instead, select the contents inside the folder, like this: 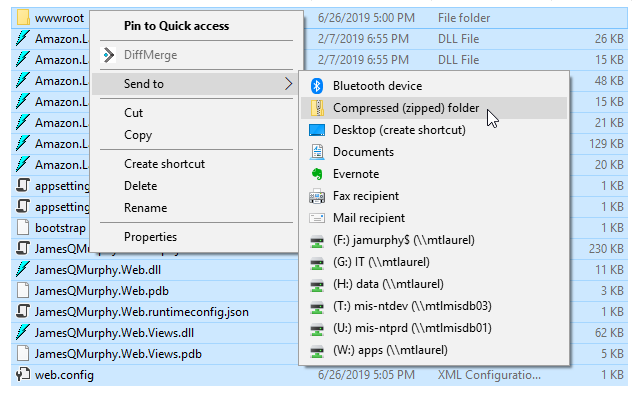 One other thing to point out. There is a field named "Handler" on the Lambda screen. This is the class that will actually be called by AWS Lambda; for the built-in .NET Core runtimes, AWS does not call your Main method. Instead, it calls the method specified in this field, which is a method defined in the LambdaEntryPoint class. It is formatted like this:

which in this our case is:

Putting it together, the configuration looks like the image below.

The web interface for AWS Lambda functions has a built-in test harness. Setting up a test to invoke the ASP.NET Core Web Application is straightforward. At the top of the page, I clicked "Configure test events":

AWS has dozens of templates to choose from. Since the Lambda function will be called from AWS API Gateway, that's the one I selected. The default test event has lots of properties to configure, but here is the smallest test event that requests the root of the website:

I named the test event "GetRoot": 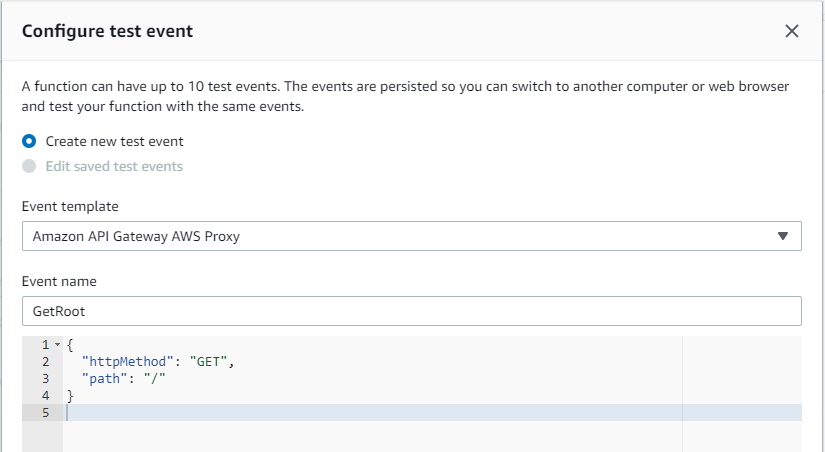 Running the test is as simple as clicking the "Test" button in the upper right corner:

Earlier, I mentioned that AWS only supports long-term support versions of .NET Core. Indeed, when I recompiled the application for ASP.NET Core 2.2, uploaded, and tried the TestRoot test, the application returned an error:

Fortunately, AWS released another package that let's us get around this limitation: Amazon.Lambda.RuntimeSupport. It makes use of AWS Lambda's Custom Runtime feature, which means that you get a bare-bones Linux distribution with no runtimes loaded, which means you are responsible for supplying everything your Lambda function needs. For .NET Core applications, this means the following:

Those steps are straightforward enough, but there's another implication for ASP.NET Core applications. An ASP.NET Core application, when launched normally, is a web server, which means it will start listening for HTTP requests. But AWS Lambda does not receive HTTP requests; it receives Lambda function calls. This means that, for this configuration, we are responsible for translating the Lambda function calls into web requests ourselves.

So, after switching the project back to ASP.NET Core 2.2., I added the new package dependency. My project file looked like this:

Here are the changes that I made to the Main method in Program.cs. If the application is passed a command-line argument lambda, it will create the necessary AWS classes to listen for Lambda events; otherwise, it starts like every other ASP.NET Core application. Note how we must manually create the LambdaEntryPoint class and reference the FunctionHandlerAsync method:

Finally, we need a shell script named bootstrap that will get executed by AWS Lambda. Notice how I pass "lambda" as a command-line parameter to the application:

The resulting call to dotnet publish looks like this. Note the extra parameters --self-contained and --runtime rhel-x641 to publish a self-contained version.

The build worked, and it's worth noting that the resulting zip file swelled to almost 40MB due to the inclusion of the .NET Core runtime files. But when I uploaded the zip file to AWS Lambda, I encountered a completely different kind of error: Permission Denied

Unix File Permissions and How Not To Worry About Them

My research into this error turned out to be a wonderful crash course in Unix Permissions (sometimes known as "777" permissions). If you've ever typed ls -al at a Unix (or Linux) prompt, you'll notice a collection of letters and dashes at the front of each file:

The first letter is a simple flag indicating whether or not the entry is a directory, and the following letters indicate read, write, or execute permissions for the owner, the group, and others, respectively. There are plenty of good resources on the web that explain these permissions in greater detail, but the problem essentially boils down to these simple facts:

Initially, I thought I would need to build the package on a Linux machine (either my wife's Macintosh or a Docker container). But fortunately, AWS does provide a way to create the correct type of .zip file, no matter which operating system you are using. Specifically, they offer the dotnet-lambda tool, which is a standard .NET Core Global Tool. The dotnet lambda tool lets you upload code directly to AWS, but it also lets you create a .zip file to be uploaded separately. If you want, you can install the tool by simply entering the following command:

Here are the commands I used to create a .zip file. I ran these commands from the root folder of the repository. Note that I still needed to pass in the --self-contained and --runtime flags; the dotnet lambda tool calls dotnet publish under the hood.

And voila, after uploading the newly published .zip file to AWS Lambda, I had a working ASP.NET Core 2.2 application! 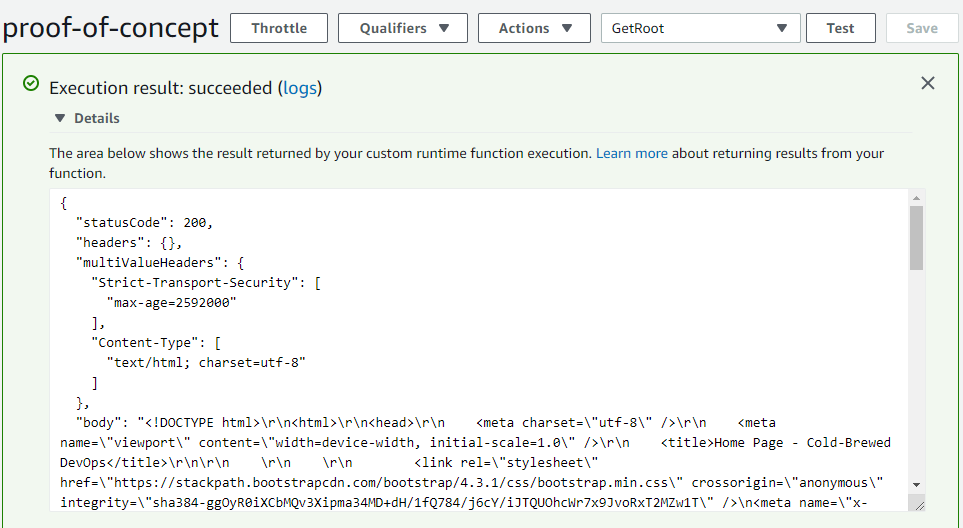 Of course, we're still not there; this is just calling a Lambda function from within the AWS console. The ASP.NET Core application is not returning results to a real browser. We'll tackle that in the next post.