Part of the reason was that, at the time, there was very little configuration to speak of. The first few versions of this site were strictly content; the blog posts were flat files, there was no user login, etc. But the main reason was that I didn't fully understand how configuration worked in ASP.NET Core. I knew there was an appsettings.json file, but I treated it merely as a JSON-formatted version of classic ASP.NET's Web.config file. It wasn't until much later, when my configuration needs became more sophisticated, that I needed to dive in and see how it worked. The end result was a custom configuration provider for the AWS Systems Manager Parameter Store, and a deeper appreciation for ASP.NET Core configuration in general.

Most of what I learned came from Rick Anderson and Kirk Larkin's excellent article on ASP.NET configuration. It's definitely worth a read.

When I first started adding configuration data to the website, I added it the only way I knew how -- as simple key-value pairs in the root node of the JSON document:

As a classic .NET developer used to the simple key-value configuration model, this hierarchical configuration approach threw me off at first. But the answer was refreshingly simple: the configuration data is still stored as a dictionary of key-value pairs. The article I mentioned says it best:

So the hierarchy structure is stored in the keys themselves with the help of a delimiter, which by the way is a colon (:). Suppose you have the following in your appsettings.json:

The underlying configuration dictionary would contain these keys and values:

Note that key lookup is not case-sensitive, even on Linux platforms. Specifying a key of either MySubnode:DeepKey1 or mysuBnODE:dEePkEy1 will return the same value ("value for DeepKey1" in this case).

It's also worth mentioning that arrays in appsettings.json are expanded into key-value pairs. If we add an array to the previous example:

The resulting configuration dictionary would contain the following entries:

Besides allowing better organization, the hierarchical structure of the config file allows ASP.NET Core to bind objects to individual sections of the configuration. Suppose we wanted to bind the MySubnode section of the previous configuration to an object. We can define a class with properties (not fields) like this:

The result is an object of type MyConfig that contains the values from the configuration data.

Suppose the configuration file above is part of an application running inside a Docker container, and you run the container with an environment variable named TopLevelKey:

Even with the same appsettings.json file, the resulting configuration data for the app in the container would look like this:

But what if you wanted to override a value deep in the hierarchy? Environment variables cannot have colons in their name, but you can use a double underscore in place of a colon:

Earlier, I said that all environment variables are added to the configuration data dictionary by default. More precisely, it happens if your application calls Host.CreateDefaultBuilder(), which most apps do since the standard .NET Core templates generate the following code:

In addition to the appsettings.json file and the environment variables, CreateDefaultBuilder() sets up several configuration providers. According to the documentation, it sets up the sources in the following order:

There's a limitation with appsettings.json and environment variables -- neither one of them is secure. appsettings.json contains unencrypted values at rest, right next to your application. Environment variables are marginally better, since they don't exist at rest, but they're still unencrypted and not the best choice for things like the client secrets needed for Twitter and GitHub authentication. For this site, I use the AWS Systems Manager Parameter Store to securely store the secrets.

The AWS Parameter Store also stores its data as key-value pairs, and it, too, has a hierarchical delimiter (a forward slash). Consider this snapshot of my own Parameter Store: 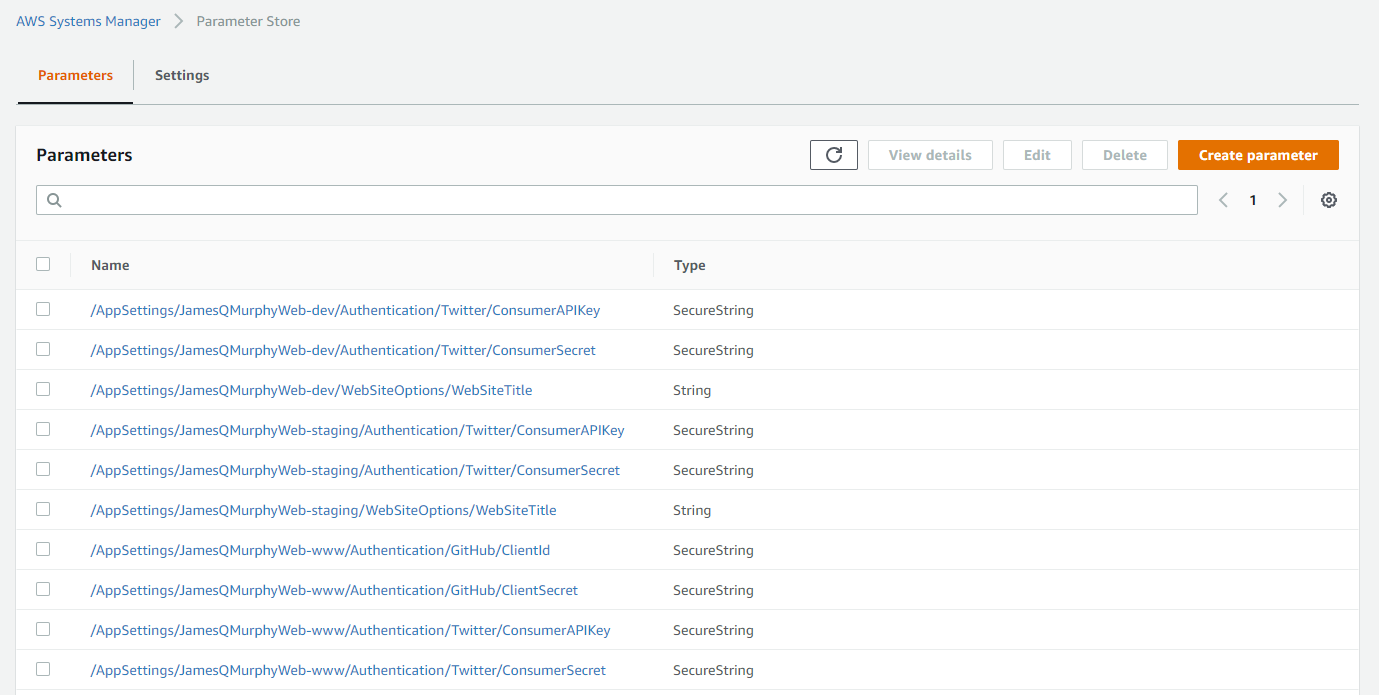 The configuration parameters are organized hierarchically, using forward slashes in the key names. All of the keys are organized under the /AppSettings/JamesQMurphyWeb-xxx/ prefix, to keep them separated from other configuration data (there's only one Parameter Store per AWS Account). Translating the key names is simply a matter of chopping off the common prefix and replacing the remaining forward slashes with colons:

Initially, this was how I was adding the values to configuration. (This code was inside my Startup.cs file.):

It worked, but besides being a chore to maintain, it didn't integrate naturally with ASP.NET Core's configuration model. What I really needed was a custom configuration provider for the AWS Parameter Store.

The configuration provider is the class that does the actual work of retrieving the configuration data and translating it into ASP.NET Core's hierarchical key-value structure. It needs to implement the IConfigurationProvider interface:

To bind to a class, ASP.NET will call the GetChildKeys to get a list of the keys that can be returned, then it calls TryGet for each key to get the corresponding value. It's up to the provider to return the key names using the proper delimiter (a colon, or the ConfigurationPath.KeyDelimiter static field if you prefer.) Note that that the provider must append its list of keys to the list of keys passed in through the earlierKeys parameter (which is, frankly, a little odd). Oh, and ParentPath can be null.

The Load function is called once, after the class is instantiated, to give the custom provider an opportunity to load all the data upfront. The GetReloadToken function provides an IChangeToken that the client can use to detect configuration changes. If the provider doesn't support it, it still needs to return a valid token; you can't return null.

My first try looked something like this. I simply mapped GetChildKeys to the Parameter Store's GetParametersByPath command, and TryGet to GetParameter:

It actually worked, but there was a problem: the TryGet method gets called every time that the configuration value is requested (ASP.NET Core does not cache the value for you). According to the AWS Systems Management pricing page, AWS charges per "API Interation." To make matters worse, the call to GetParametersByPathAsync() gets both the keys and the values, but the GetChildKeys method above throws away those perfectly good values and only returns the keys.

I briefly considered writing my own optimized version to address these problems, but I couldn't do any better than the ASP.NET Core's ConfigurationSource helper class2. By using the helper class, all I had to implement was the Load method; the class provides default implementations for all the other methods of IConfigurationProvider. The Load method was straightforward to implement; after calling GetParametersByPathAsync(), I simply iterated over the returned key-value pairs and added them to the internal Data dictionary.

The full class can be found here, but I've included the implementation of the Load method here:

I've covered the basics of configuration in ASP.NET Core, and how to write a custom configuration provider. But in order to use the provider, we need to incorporate it into the host build step. There's a few more decisions to be made: Where in the provider list should the new provider be? What can it override? How do we configure the provider itself? I'll cover all of that in my next post.